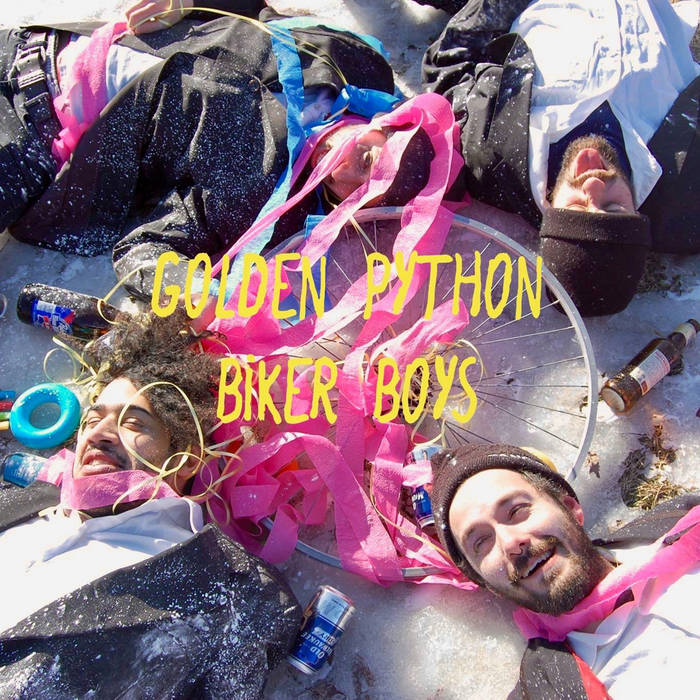 Officially formed in 2013, Montreal's Golden Python comprise a sort of underground supergroup, featuring musicians from a host of local powerhomes such as Bisbâyé, First Fragment, and Gulfer. But if you talk to the band, it's easy to get the impression Golden Python was gestating for years. In 2010, longtime friends Vincent Ford (guitar/vocals) and Julien Daoust (drums) formed Major House, a raucous math rock quartet with a proclivity for fast, technical music. After Major House disbanded, Ford says that "it was important for Julien and I to keep developing the textures that we created with Major House, to keep evolving in a prog-meets-punk setting," so Daoust and Ford banded with guitarist Nathanaël Labrèche and bassist Vincent Savary to complete Golden Python.

Though the band is doubtlessly tied to math rock and other virtuosic subgenres, their new full length, Biker Boys, exhibits a complex mesh of emo, punk, and grunge. Biker Boys demonstrates the band's compositional acumen through an amalgam of gritty, enchanting anthems and progressive song structures. The songs will start and stop as they please, while loudly articulating themes of friendship and maturation. At every turn of the album, it's clear the band intends to constantly push itself beyond the limits established by their past work.

Tracks like 'Sylvia' reveal the musicians' abilities of restraint and tact, wherein guitars drip like syrup over angular, subdued rhythms. But the band also gives itself space to explore crunchier, more distorted atmospheres. In album closer 'Meggy,' led by a chugging bass line all the way through to the climax, Ford proclaims without screaming, "you're the reason that I'm still here," perhaps a nod to the impossible chemistry of the combined skills of his bandmates.
In spite of each member's stunning technical proficiency, the songs never feel too busy. Their precise arithmetic shows a band unafraid to adapt to one another's skillsets so that everyone gets their own unique compositional voice.

Released by Skeletal Lightning (US/EU), Stack Your Roster (CAN), and Friend of Mine Records (JP)

Thank you endlessly for your support!

Bandcamp Daily  your guide to the world of Bandcamp